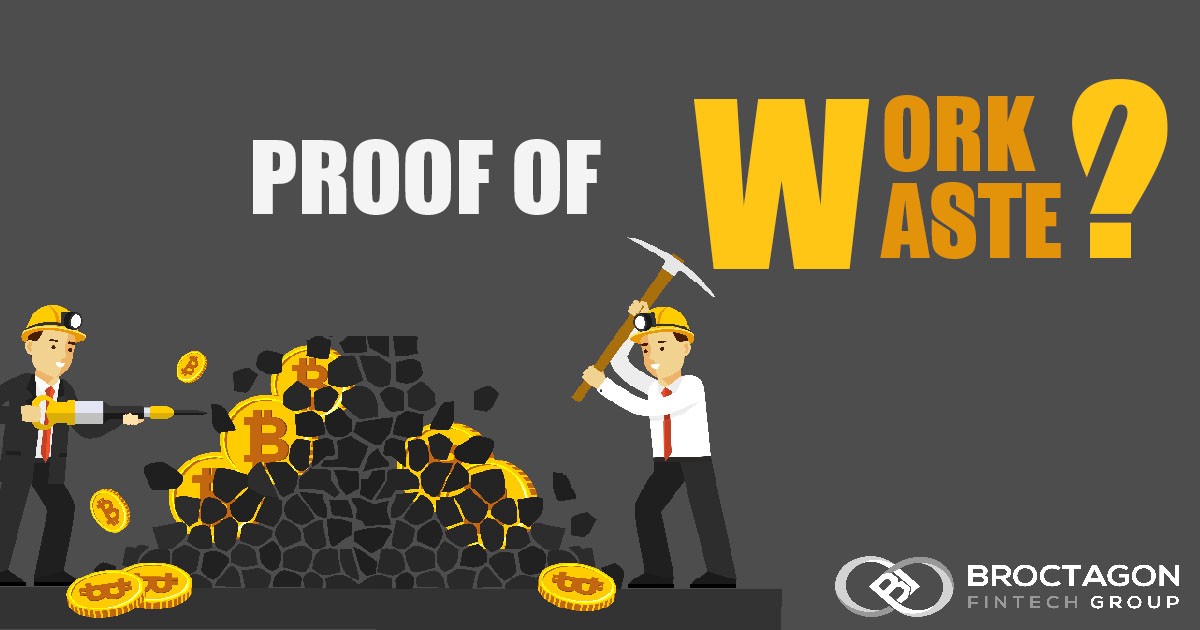 Proof of Work or Proof of Waste?

Businesses and industries have been shaken by the boom of blockchain technology. As we discuss its position as a frontier in technology, blockchain — with all its applications and hype as the ‘future of money’ — does not come without a cost.

The very method used to confirm and form blockchain is the price to pay. There are many consensus algorithms, but the golden child of Bitcoin, Proof of Work (PoW), is extremely costly and energy-consuming, and may be considered a ‘waste’. The net effect of the Bitcoin mining industry is that it is consuming $3.6 billion annually to produce approximately $5 billion of economic gains.

Is this worth it for the price of technology?

As a financial technology solutions provider, Broctagon regularly advises and provides technological services for companies who are looking to integrate blockchain into their businesses.

In blockchain, Proof of Work is a consensus protocol, an algorithm used to confirm transactions and create new blocks to the chain, which is where the name comes from. With PoW, miners compete against each other to do these confirmations, which involves a complicated mathematical puzzle and computing power and get crypto rewards.

This whole point of this distributed ledger technology is decentralization and transparency. The ledger contains a record of all Bitcoin transactions, in ‘blocks’, so that there can be no tampering. Any altered version would quickly be rejected by other users.

A famous thought-provoking question Vitalik Buterin posed for the cryptoverse was,

PoW is burning billions of dollars per year, even more than all scams and thefts combined. Isn’t it a tragedy?

For the Ethereum founder to call it a “tragedy” is worrying, since it forms the basis of many blockchain protocols. If Proof of Work is only burning energy and wasting resources, without giving us real-world applications, then yes, that would be considered a tragedy. However, we have to look at both sides to properly evaluate if the cost outweighs the advantages before deciding if Proof of Work is a waste.

Yes, the fact remains that Proof of Work ‘wastes’ a lot of electricity by utilising a lot of it — and therefore costs a lot. In fact, it accounts for 90% of its c lot of money. As mining reaps profits, people are very willing to run these power-hungry machines for a piece of the pie. Over the years, as the price of the cryptocurrency and the energy consumption of its network has skyrocketed in correlation. The entire Bitcoin network now consumes more energy than a number of countries, based on a report published by the International Energy Agency.

In a way, it is quite depressing to think that it is costing more than one of the very problems it was designed to solve. Though, PoW mining machines are getting better each year with being more energy efficient.

Ethereum has already announced its shift from PoW to Proof of Stake (PoS), which could signify a drastic change in the community, its miners, and the way the blockchain operates.

The method may consume a lot of energy and money, but to call Proof of Work a ‘Proof of Waste’ is not exactly fair either.

It consumes a lot of energy but this energy consumption correlates directly to the value of the token. It ‘wastes’ a lot of electricity, a real-world resource, to solve puzzles and proving it requires a lot of time, effort and commitment. This is the proof of commitment to solve the puzzle; we need this ‘waste’ if we are to achieve security. In cases like PoS, a miner stakes a portion of his tokens for mining in order to prove his commitment to the network — but there isn’t any real penalty. ‘Wasting’ energy is the point and proves the commitment in PoW.

Is Proof of Stake better?

Of course, there are many types of consensus algorithms, from PoW to PoS, to more complex methods such as Delegated Byzantine Fault Tolerance. Of all the different consensus methods, PoW is the most costly, but PoS is not without its flaws either.

PoS doesn’t require miners to solve complex mathematical puzzles in order to secure transactions. Instead, it uses a staking mechanism in the form of economic incentives to secure network security, and thus is more energy-efficient way to achieve consensus.

There are three cryptocurrencies built on the PoS model that has been in operation for a while. Dash, NEO, and Stratis are currently using the model and have not suffered any attacks.

However, the problem with this is that it doesn’t require any real commitment, like electricity or even time. PoS has nothing to do with decentralization, it is potentially susceptible to a handful of whales manipulating the network. If we are moving towards decentralization, this almost seems like a precarious situation.

Are Hybrid Models the Way to Go?

Therefore, many companies that are dedicated to solving the energy issue often adopt a version of PoS, with modifications.

For companies like Carbon Grid, its Proof of Authority (PoA) consensus protocol is aimed at reducing energy-intensive mining, but also improving on PoS as a straightforward and efficient form of the staking model with known validators and governance-based penalty system, designed to prevent consolidation of power over consensus.

In a whitepaper written by Vitalik Buterin and Virgil Griffith, Ethereum’s Casper protocol is said to present “a novel Proof of Stake system,” for the Ethereum blockchain. Casper is designed to be more Byzantine Fault Tolerant and mitigate the “Nothing at Stake” problem that PoS presents. Where it differs is that anyone who acts in a malicious manner will immediately get punished by losing their stake.

Our Duty as Industry Experts

At Broctagon, we don’t just develop the tech. We have industry experts that ask the real questions such as, “Does your business really need to be on the blockchain?” Our advisors ensure that there is a solid use case for your project to be taken onto the blockchain. Can your company sustain the network? Is the blockchain application model sound? Do the benefits outweigh the costs? If the answer is no to any of them, then we have to work on something to refine the business direction, or seek alternative solutions to suit their needs which may not necessarily involve blockchain technology.

These pertinent things all businesses should ask themselves before jumping on the blockchain bandwagon. It’s ironic that the very revolutionary technology is also costing us. As we thread the fine line and balance between decentralization and centralization, control the push and pull of authority, we must ask ourselves, what is the best way?

It’s true growth for the industry only if, in the relentless pursuit for evolution, we don’t end up setting ourselves back by miles in other regards.